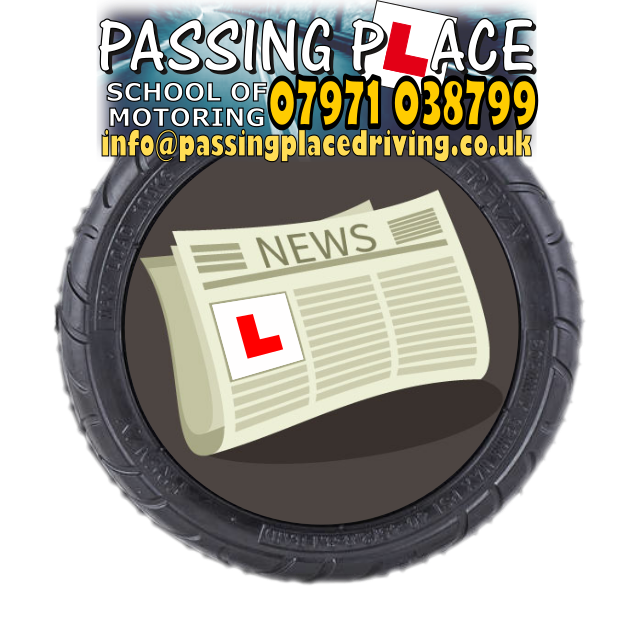 Here we go again! The DSA have had to cancel some driving tests due to the recent snowfall. If you are unsure about whether your test will go ahead, then on the day of your test, ring the driving test centre (the telephone number will be on your test appointment confirmation letter) to check.

The road markings have changed at the Hackwood Road roundabout. Pay particular attention if you are going ahead (from town) towards Alton A339 as the signs and markings now show that you should use the right lane to go ahead (the left lane is now left only).

I have recently sat in on a few practical tests to check exactly what the examiner is asking / looking for on the new independent section of the driving test. What happens is the examiner asks the candidate to pull up in a convenient place and then asks the candidate to follow the route shown in a picture (for example a route showing you to go ahead 2nd exit at the next two roundabouts) and / or listen to verbal directions based on road traffic signs (e.g. at the roundabout follow the sign for Town Centre).

The independent section lasts about 10 minutes, and the examiner makes it clear when that part of the assessment is over and that you will be thereon directed normally.

All my pupils so far have passed the driving test and in particular have had no problems at all dealing with this part of the test. So for those taking their test soon, don't worry!

Change to the driving test nearly upon us!

The change to the learner driving test (addition of the independent drive) will start from 4th October 2010. I will be sitting in on pending tests to see exactly what the examiner asks / expects from test candidates on this portion of the exam. Do not fear - this additional element will not necessarily make the test any harder, and indeed is a good idea; after all, when you pass your test, you need to drive independently all the time!

In the Driving Standards Agency's continual aim to improve the driving test and better prepare candidates for driving post-tuition / driving test, from 4th October 2010, test candidates will asked to drive for about 10 minutes independently (without being directed by the examiner) by following a series of specified road signs / directions. The candidate will be asked to do one of the following:

2. Drive following a series of verbal directions (diagrams will be shown to candidates).

3. Drive using a combination of both of the above methods.

The diagrams may show a simple route path: e.g. at the next roundabout follow the road ahead, then take the second road on the right, and then at the end of that road turn left.

During the Independent Drive, the candidate must still drive correctly as per the rest of the driving test including using correct observations, using mirrors correctly, obeying speed limits, road markings and signs etc, but completely independently, unaided and unprompted.

The test duration may also be increased to allow extra time for Independent Driving (and this may result in an increase in the test fee).

To allow more time for the new Independent Driving part of the test, you will only be required to carry out one driving manoeuvre (chosen at random from the 4 standard manoeuvres).

The driving test was first introduced in Britain on the 1st June 1935 - now 75 years ago!. In 1934, one year before the driving test was introduced, over 7,000 people died on British roads at a time when there were only 1.5 million cars. Now the number of cars on British roads had grown to around 35 million, whereas the number of deaths has fallen to around 2,500 per year.

The positive impact of the driving test on road safety should not be understated and the test further improved safety conditions in July 1996 with the introduction of its theory test component. In honour of the driving test's 75th birthday, Road Safety Minister, Mike Penning, said: "The driving test is not just a rite of passage, it has helped save thousands of lives on our roads. The test and the learning needed to pass it are a vital part of giving drivers the skills they need to drive efficiently and safely. High standards of driver training and assessment are an essential contribution to helping Britain's roads remain among the safest in the world".

Observer on the driving test

From 6 April 2010, examiners will ask candidates if they would like their instructor to sit in on their test and listen to the feedback.

New lane guide markings have been added to the Thornycroft roundabout in Basingstoke (the large roundabout near Morrisons). This should help drivers to keep to their lane, particularly when going ahead.

Snow which fell during December 2009 and January 2010 has forced to the Driving Standards Agency to postpone thousands of driving tests throughout the UK . Basingstoke was particularly badly affected by the heavy snowfall. Those that have had their test cancelled - be patient - the DSA will send you a new test date in the post.

The pass mark for the question part of the theory test remains unchanged at 43 out of 50.

Learning to drive - summary of consultation

After consultation, the Government has decided to carry out a series of changes in the way people learn to drive and are tested. The changes will be gradually phased in so as not to disrupt anyone current learning to drive. Initial plans include:

• implementing a new pre-driver qualification in safe road use.

• from October 2009, introduce a partial credit (in the form of a condensed theory test) towards the car theory test for pupils awarded the new pre-driver qualification; and the introduction of case studies to better assess understanding of driving theory.

• from October 2010, the Instructor / Supervising driver will be required to accompany the candidate on the practical driving test; and a reduction in the number of manoeuvres required during the practical test to allow for more driving time which will include a section of driving where the test candidate will not be directed by the examiner and instead will need to follow road signs to direct themselves to a required destination.

Seems that most of the construction / lane markings have been completed, but still waiting for the traffic lights to be operational.

Pupils are already booking tests for April and beyond, so it is still business as usual at the Basingstoke driving test centre. Any closure doesn't look likely at any time soon; indeed it is not certain whether the centre will close at all.

The Basingstoke driving test centre is still alive! There is still no definitive answer as to when the centre is to close. Current rumours are that the centre might close during summer 2009 or even remain operative for car tests only (fingers crossed!).

The Driving Standards Agency has announced that new vehicle safety questions will be added to the practical driving test.

The DSA first introduced the "Show me, tell me" vehicle safety questions in September 2003. Following a review, they have decided that additional questions should be included in the driving test. The decision has been made to more accurately reflect the need for candidates to have the skills and knowledge to ensure they and their vehicles are safe to be on the road.

The added questions will cover the use of wipers, demisters, brake lights, fog lights, head restraints, ABS warning lights and the correct operation of relevant controls and switches.

The number of questions asked will remain unaltered, i.e. test candidates will be asked 2 questions; one will be a 'show' question, the other a 'tell' question.

Click here to view the new set of questions and answers.

In June 2008, the Driving Standards Agency has formerly announced that the Basingstoke Driving Test Centre is to close. The test centre has been operating since 1981. The reason stated is that the centre does not meet European Union regulations for motorcycle testing, which are due to come into force in September 2008. Currently no date has been set for the closure.

In 2007, nearly 5,000 car tests where conducted at the Basingstoke test centre, compared to only 600 motorcycle tests. Basingstoke is a great place to take a driving test with a higher than national average pass rate. Why car drivers should suffer the loss of their local centre just because motorcycles won't be able to use the centre is ludicrous! Moreover, Basingstoke is a rapidly expanding town and needs a permanent test centre! Let's hope a petition will stop this madness!

On 7th May 2008, the Government has made proposals to make major changes to the driving test and the driver learning process. The measures proposed are designed to cut the number of deaths and injuries caused by novice motorists. If given the go ahead, the changes would come into effect as soon as 2 or 3 years.

Proposals, aimed to give a more realistic appraisal of a candidate's ability to cope with real life driving situations, include:

• some driving manoeuvres being taken out of the practical test to give more general road driving assessment time. Instead, an Approved Driving Instructor would to certify that the candidate is capable of performing them before they sit the driving test.

• driving examiners will give less "turn by turn" instructions to candidates. Candidates could be told to follow road signs to a destination instead.

Increase in the number questions asked in the theory test